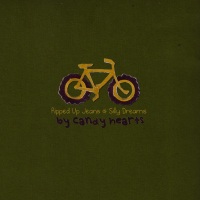 This is an interesting record. Interesting because, in general, I know I should really like it, but for some reason can not get too stoked on it. Something about it leaves me more ambivalent than anything.

This is on the If You Make It label/collective/whatever. The description of this band says they are a mix of “the sweet pop/rock band Element 101, and pop/punk band Lemuria with a dash of The Weakerthans and Jawbreaker thrown in.” This is accurate, but this is where the issues come up.

Listening to this band makes me feel like listening to something else instead. Not because it is bad, because it really is not. But, it sounds like other records I have (that tend to sound better). Like, the first time I listened to this record, I was driving to work. I got through the first few songs, and then just ended up turning on Lemuria instead.  The Lemuria comparison makes sense. But, the Jawbreaker and Weakerthans comparisons do not. Save for the guitar on the song “Cracks Beneath Closed Doors,” there was really nothing that made me think of Jawbreaker. And, I can not even hear anything to make me think of The Weakerthans.

Anyway, what does this sound like? More or less, female fronted pop punk/indie. This leans more on the punk side than the indie side. On the If You Make It Site, they draw a comparison to “early Lemuria.” By “early” I think they mean the 2004 Demo.

The problem is, none of the songs are all that strong. It seems more like cutesy and shit, sadly to a detriment. You know, stuff like “we go together like the alphabet and letters that spell out our names, so perfectly together” (from the song “You And Me”).  Then there is the song “Punk Songs.” It is an acoustic song, but is basically based around Ramones riffs. It is another example of a fun song that kind of got bogged down by bad lyrics. Just imagine The Unlovables lyrics (cheesy and cutesy) played over some old Lemuria music. Except, where Hallie Bulliet always kind of wrote songs with a wink/nudge type feel to her lyrics, it seems like this band is being totally serious with it.

Being that this was obviously made by the band, the production is not very good. Mariel Loveland’s voice is not strong enough to stand out over the guitars, especially on songs like “What I Want” and “Blocking The Sunshine,” which have pretty big, hooky choruses.

Overall, this is an ok record though. It just makes me think of other things I could listen to instead. It is one of those records where the band relies too much on their influences. As far as debut full lengths go (pretty sure this is), it is about what you would expect. If they can tighten up the song writing and get a good producer behind them, I do not see any reason why they could not be great. They just need to find their voice. I guess I will give this a 2.5 out of 5. It is an average record from a band that shows potential to be great.