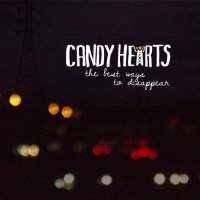 Candy Hearts, man. They are a band I have been following since their first record back in 2010, and I have been impressed by how their records just keep getting better. As such, their new EP is following that trend.

If there was a record that is going to make this band huge, The Best Ways To Disappear is it. It is the best they have ever sounded, they have the Bridge Nine promotional machine behind them (via Chad Gilbert’s Violently Happy imprint), and a batch of really great songs. This record is the logical extension of Everything’s Amazing And Nobody’s Happy. By that, I mean that they have further honed their songwriting. Like that record, these songs are quick shots of energy. The main difference being that this EP feels more focused and is helped by damn near perfect production.

There isn’t much else I can say about this band that I haven’t covered in the other two reviews I have done of their records. The songs sound punchy as usual. The best part is that they have finally come out of the shadow of their influences. While the record treads very common subjects, namely the classic indie/pop punk love songs, it does it in a fun way. Bad Idea, the album opener, sets a hell of a tone.

It is amazing how great production can make a record. New Found Glory’s Chad Gilbert fucking nailed it. If his production on Nothing To Prove by H2O revitalized that band, it did a hell of a lot to finally have Candy Hearts sound as great as they should.

Everyone who is stoked on indie/pop punk should get this. It is a no brainer.

So, it is that time. Year in review lists are always kind of annoying. I will make a list now, then look back and disagree with myself later. Sometime in march, I will be pissed at my list. But, before I make the list, I guess I should do a quick thing.

2011 was an interesting year. It was really good at times, and really fucking terrible at others. A lot of stuff associated with this blog fell on the good side. Back in March, I dropped the Emo Is Not Dead article. Initially, it was just going to be a stupid article (not unlike the other “articles” I have written). It seemed like that shit struck a chord. As a result, I got a bunch of people coming here, I started getting promos, and I got my first troll. So, you know, that was pretty sweet. Thank you to all the awesome people who sent me promos, linked to shit I wrote, sent leads about things to check out, and just generally helped me make content happen. Ever since March, I have kind of been forced to feel like this blog is actually something worth doing. Specifically, thanks to Count Your Lucky Stars, Tiny Engines, Square Of Opposition, and Topshelf for putting out so much awesome shit this year. I look forward to giving you all my money in 2012.

On the flip side, the latter half of this year has been a shit storm. Goofy shit kept happening, from the stupid MS diagnosis back in August to the current broken molar / swollen jaw I have now. Medically, this year has been stupid as fuck. The reason why there was a drop in content is due in large part to all that. I know that seems like a cop out, but it is what it is. I try my best to keep up with shit though. Whatever. On to the lists.

In no particular order, the top records of 2011 were:

EPS / SPLITS / OTHER:
HONORABLE MENTIONS:
OK. That is it. Anyone from Chicago going to be at the Dowsing / E!E! (IWALE) show tomorrow, I will see you there. Look for the giant dude wincing in pain. That would be me. Stupid tooth.
In closing, fuck all the bands that I like who broke up this year. Especially you, Snowing.

Let’s talk about Candy Hearts. I did a review of their previous full length last year. I ended the review saying “It is an average record from a band that shows potential to be great.” So, where do we stand now?

Everything’s Amazing & Nobody’s Happy is really a pretty fair extension of that record. They are a pop band that plays pop music. Clear punk influence, without being overly concerned about being “punk.” It has some cooler guitar leads, maybe. The production sounds cleaner. Not overly polished, but definitely shinier. As far as the few beefs I had with the previous record, this one puts those to bed.

Overall, this is the record this band needed to make. It is playing on the strengths of the previous full length, but not abandoning the reckless fun that goes along with the genre. The vocals are still a little rough sounding, (well, rough compared to the pitch corrected hell that is pop music), the hooks are catchy as fuck, and the energy is there in spades. If the previous record made me want to listen to other things, this record is the opposite. It is a record that keeps your attention.

There is no shortage of awkwardness and self-deprecation going on here.  On the song “She’s So Cool” we get the following:


“She’s everything I want to be

She’s everything someone would need
She’s everything they want
I’m not that girl
And I don’t think I’ll ever be that cool”
It is one of those songs that anyone can get stoked on. You figure everyone compares themselves to someone, and rarely do they quite live up to the expectations. This particular song does not quite fall in the same glad-handing traps that seems to be all the rage.
Although, yeah, we also have kind of the more optimistic side on “Good Enough”:

“Always sort of out of key
Addicted to caffeine and bad poetry
And not saying the things that I mean
You’re always sort of mad at me
Because I’m late for everything
And my socks don’t match and my hair is messy
Well, I know what you’re saying before you do
That I’m not good enough for you

Basically, we get some pretty great songs about shit everyone can understand. Any record that can be universally understood without being pandering is always a good things. Songs about friends, relationships, and social awkwardness. Maybe a little twee, but who cares? Plus, any record with a song that features a chorus about listen to Jawbreaker is always good.
There is only one thing that bugs me. It is a minor quibble. But there are two songs in a row that are very Alkaline Trio-ish. The riffs in “When I’m With You” and “Something Special” are a little too “Fine Without You” and “Bleeder,” respectively. Not direct lifts, but pretty fucking close. But, that is kind of a minor point.
All in all, a great record. It is one of those records that sounds good on a sunny, summer day. Too bad it is already October. Luckily, Chicago is in the middle of Indian summer. Might as well give it a go.
One of the better records I heard this year. Sugary pop/punk at its best. Go pick this up.
P.S. I would be remiss not to mention this: yeah, Louis C.K.
Candy Hearts
Buy It @ the band’s store
Buy It @ Kind Of Like Records
Stream It @ Facebook

This is an interesting record. Interesting because, in general, I know I should really like it, but for some reason can not get too stoked on it. Something about it leaves me more ambivalent than anything.

This is on the If You Make It label/collective/whatever. The description of this band says they are a mix of “the sweet pop/rock band Element 101, and pop/punk band Lemuria with a dash of The Weakerthans and Jawbreaker thrown in.” This is accurate, but this is where the issues come up.

Listening to this band makes me feel like listening to something else instead. Not because it is bad, because it really is not. But, it sounds like other records I have (that tend to sound better). Like, the first time I listened to this record, I was driving to work. I got through the first few songs, and then just ended up turning on Lemuria instead.  The Lemuria comparison makes sense. But, the Jawbreaker and Weakerthans comparisons do not. Save for the guitar on the song “Cracks Beneath Closed Doors,” there was really nothing that made me think of Jawbreaker. And, I can not even hear anything to make me think of The Weakerthans.

Anyway, what does this sound like? More or less, female fronted pop punk/indie. This leans more on the punk side than the indie side. On the If You Make It Site, they draw a comparison to “early Lemuria.” By “early” I think they mean the 2004 Demo.

The problem is, none of the songs are all that strong. It seems more like cutesy and shit, sadly to a detriment. You know, stuff like “we go together like the alphabet and letters that spell out our names, so perfectly together” (from the song “You And Me”).  Then there is the song “Punk Songs.” It is an acoustic song, but is basically based around Ramones riffs. It is another example of a fun song that kind of got bogged down by bad lyrics. Just imagine The Unlovables lyrics (cheesy and cutesy) played over some old Lemuria music. Except, where Hallie Bulliet always kind of wrote songs with a wink/nudge type feel to her lyrics, it seems like this band is being totally serious with it.

Being that this was obviously made by the band, the production is not very good. Mariel Loveland’s voice is not strong enough to stand out over the guitars, especially on songs like “What I Want” and “Blocking The Sunshine,” which have pretty big, hooky choruses.

Overall, this is an ok record though. It just makes me think of other things I could listen to instead. It is one of those records where the band relies too much on their influences. As far as debut full lengths go (pretty sure this is), it is about what you would expect. If they can tighten up the song writing and get a good producer behind them, I do not see any reason why they could not be great. They just need to find their voice. I guess I will give this a 2.5 out of 5. It is an average record from a band that shows potential to be great.