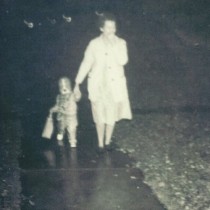 The term “emoviolence” rarely gets used anymore. It was obviously a genre tag that started as a facetious thing, but goodamn. If it was created to describe bands that mix powerviolence with screamo, then we need to bring it into the discussion here. Lord Snow don’t fuck around. Made up of members of Chicago area bands (Suffix, The New Yorker, Lautrec, and Raw Nerve), this is a band that knows exactly what they’re doing.

Solitude is not a record that you put on as background music. It’s 11 songs that demand your attention for the record’s 19 minute run time. It’s jagged, it’s raw, it’s loud and it’s one of the best things to come out in 2013. If you miss the days of emo music being hardcore, this should be your new favorite record. But, genre discussions don’t really matter in the end. It’s the music that counts.

Solitude is an abrasive record. It may not be for everyone, but even people who don’t like this kind of stuff have to appreciate the heart. The band leaves everything it has on these songs. There is one thing I think about every time I listen to this record, and it’s about how Steph Maldonado even has a voice after recording it. Her scream is raw and it sounds like her voice could give out at any moment.

The rhythm section of Steph Maldonado (bass) and Erik Anderson (drums) lay down a great foundation. Anderson is especially great. He’s able to go from full blast to reigned in at the drop of a hat. Niko Zaglaras (guitar) is able to shift between fast and chaotic to calm and melodic just as quickly. There are some great dimensions to this record that a lot of people are going to overlook.

This is a blood and guts record. The lyrics are great, the music is fantastic, and everything about it works.

*Note: this seems to only be available in the US from the band directly (and is currently sold out). So, if you really want a physical copy, you’ll probably have to get it on import from Adagio 830. Bummer.

It has been eight years since Circle Takes The Square last put out a full length. The perfect As The Roots Undo came out way back in 2004, and has been many people’s only exposure to the band. Going that long between records is always a dangerous proposition. Bands will either maintain a cult following, or else people will just kind of forget about them. Personally, I was kind of in the middle of those options. I never forgot about them, as their self titled EP and aforementioned full length were pretty much on constant rotation until about 2010. I did, however, give up on ever getting a new full length. Even when the Decompositions: Volume Number One, Chapter I: Rites of Initiation came out back in 2011. I figured it was a one and done EP. Needless to say, when the new record dropped on 12/21/12, I was not even expecting it.

Decompositions: Volume Number One is a very dense record. It is a super cathartic release, and not really a record you put on just for fun. It is a record that one has to actively listen to in order to fully appreciate. As they are wont to do, Circle Takes The Square are all over the map with influences. There is metal, screamo, powerviolence, and even a little indie folk influences throughout. This much going on at once would be fucking disastrous in the hands of a lesser band. People generally use the term “atmospheric” to describe mellow, ambient things. This is an atmospheric record, but that atmosphere is more apocalyptic than calming.

Nine songs blast through in about 56 minutes. There are some sparse moments. Album opener, “Enter By The Narrow Gates”, starts with about a minute of chanting. The remainder of it’s almost seven minute run time is spent building to the release that is the second cut, “Spirit Narrative.” And, when it explodes, it fucking makes it count. It is a slow burn, but it keeps your attention. Once your work yourself into the record, it is business as usual. Business as usual for this band is not such a simple business.

The thing that sold me on Circle Takes The Square was the chaotic nature of their records. It would go from calm to full on chaos multiple times within a song. It can make things a little disjointed at time, but it keeps you involved. That is the only problem I have with this record. Everything seems more calculated. Nothing on this record feels very spontaneous. All the slow parts are where you expect them to be. It ebbs and flows in a way that would be comfortable in any other record, but seems out of place on a full length from this band. This isn’t a knock on the band, as this record is still amazingly engrossing. The problem is that they are so honed and aware of what they are doing that nothing stands out above all else. The record starts really strong. With the exception of album closer, “North Star, Inverted,” the bottom half of the record is a little less strong.  However, that fucking closer is one of the best things this band has done.

Pushing 11 minutes, “North Star, Inverted” is beautiful. It starts with a building drum, into a post-hardcore guitar part. Everything is generally what you expect, and then it throws a curveball. Two minute and 15 seconds in, you get a very calm acoustic guitar lead. It is basically a perfect song.

To wrap this overly long review up, this record is great. While it is lacking some of the exuberance of As The Roots Undo, it still fucking kills it. I didn’t even need to write this review, as anyone who is a believer in this band has already checked it out anyway.