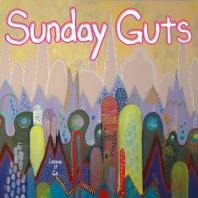 Hey, let’s take a break for a minute. I’ve been talking about so many emo records recently. I need to cleanse my palate. That said, let’s talk about Sunday Guts. They’re back with a new EP called Leave It Go. It is some really good guitar pop, and I feel like we could all use some of that.
Leave It Go is the follow up to last year’s Grey Tipi (which I looked at last September). Like it’s predecessor, it is four songs of hooky guitar pop. While “guitar pop” sounds like an easy enough classification, Sunday Guts seem to draw from various parts of the genres long history. There’s some Guided By Voices and Sebadoh in there. But there is also some British Invasion era stuff too (to my ears anyway). To the latter, I hear a fair amount of The Zombies and The Hollies.

Musically, the guitar is the star of the show. The riffs are catchy as all get out, but aren’t exclusively basic chord progressions. The songs keep your attention. The vocals are also noteworthy. The lead has some effects happening. They have a bit of fuzz and distortion. It sounds good. The backing vocals shine. Overall, it is kind of a lo-fi affair. Everything is clear, but remains far from over produced. It’s shiny without being slick.

As a two man band, Billy Kilgannon (Vocals/Guitar/Programming) and Victor Berger IV (Bass/Vocals/Keyboard) have produced some great work here. It is a natural progression from their prior EP. It is really great release, and really worth a listen