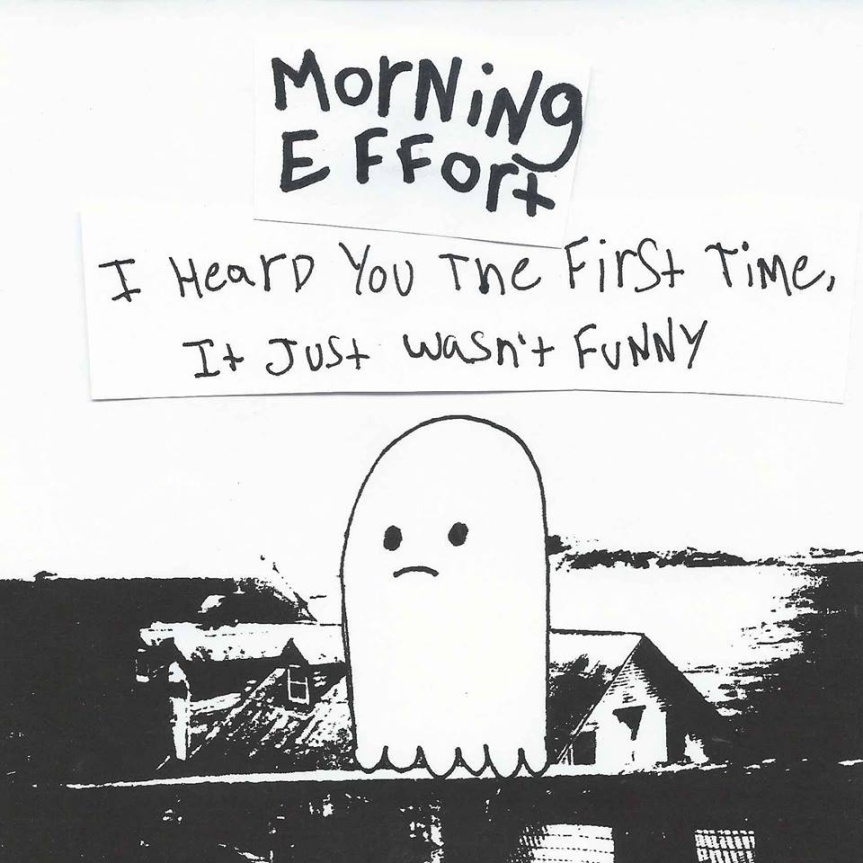 The up and coming emo band market has been flooded for quite some time now. It makes it very hard to keep up with all the bands that are putting out good music. It’s a bit like an ongoing game of whack-a-mole. Just when you get one band covered, another one pops up somewhere else. So to have not heard Morning Effort until now isn’t surprising. What is surprising is that they are based out of a town about 30 minutes south from me. Never heard them until I got an email.

Morning Effort’s second EP, I Heard You The First Time, It Just Wasn’t Funny, is a very enjoyable listen. It’s a very by the numbers kind of record, but still an engaging listen. It’s a short, six song EP. It is very much a lo-fi, DIY type release. It might fall under the greater “bedroom record” umbrella, but that really adds to the package. It’s melodic, but still a little rough around the edges. The whole proceeding is about 10 minutes of raw, punk/emo music. It really covers all the bases that I love, and expect, an Illinois band to cover.

There is a mixture of clean singing and yelled vocals. It’s not screamo, but I could see the influence. Morning Effort are definitely more of an emo/punk type band. There is a lot of muscle to these songs. Especially since the band is only a two piece. As far as sound, thinks somewhere in the middle of Free Throw and Dads. Not too much of the standard Kinsella aping, save for on “’Shitty Kinsella Rip Off’” and maybe “Jean Simmons.” Don’t get me wrong, there is still the genre standard “twinkly” guitar throughout. But the punk elements definitely stand more to the front than in some other similar bands.

It’s a ten minute listen, and it’s more than worth your time. It is what it is. More than anything, it is a band that has a lot of promise. This is their second EP, and they have a hell of an upside if they can continue to grow.

**This had a limited run (25 copies) on cassette. Looks like it is sold out for now. Bummer.**

One thought on “REVIEW: Morning Effort – “I Heard You The First Time, It Just Wasn’t Funny””