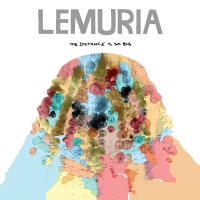 With the release of their third LP, Lemuria is in a weird position. They continue to grow creatively, but there always seems to be a push back from the fans. There was a sizable group of people who were disappointed by Pebble. Those people were missing out. The main complaint seemed to be that it didn’t sound like what they wanted. It would have been easy enough for them to remake Get Better. But it wouldn’t have been genuine.

That said, The Distance Is So Big is a great example of that genuineness. The record builds on the more mid-tempo, post-hardcore influenced sound the band started playing around with on Pebble. It is, however, a slightly happier sounding record. If Pebble was the blood and guts record, The Distance Is So Big is other side of it. It excels in that the lyrical content has gotten stronger.

This record is really a showcase of Alex Kerns’ growth as both a songwriter and musician. His vocals have gotten stronger, and his range has widened. While he still has his usual delivery in these songs, he has gotten away from the almost monotone delivery of the past. It is a great change. This is most noticable on “Clay Baby.” This isn’t to say that Sheena Ozzella doesn’t shine on this record. While only penning one song, the songs she sings lead on continue to be among the strongest. She goes between mellow and poppy at the drop of a hat. “Bluffing Statistics” being a great example of the former, “Scienceless” being a great example of the latter.

This is really a nice middle ground between Get Better and Pebble. The moments of indie pop absolutely shine. The mid-tempo, post-hardcore nails it. The 90s alternative influenced songs shine. This is in part to the spot on production of J. Robbins. The addition of Max Gregor on bass is also a key reason. He adds a great amount of depth to the record. While the previous bassists have been great, he seems to gel with the band.

More or less, this is the perfect record for Lemuria to put out. Even the people who were turned off by Pebble can get into this. The record is a great middle between the prior full lengths. In a just world, they would be the biggest band in the world.