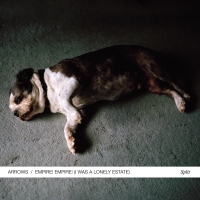 ARROWS / EMPIRE! EMPIRE! (I WAS A LONELY ESTATE) SPLIT 7″

From Brisbane, Australia, Arrows open this split up. I had never heard this band before, and I was quite pleased with what I heard.  Their song on here, “All Passwords Are Brisbane,” is certainly a great introduction to me. Musically, they have more than a little in common with Empire! Empire!. It is a bit of a no brainer to say that if you dig one, you really should dig the other.

The two Empire! Empire! songs on here, “Turbo Stasis” and “We Did Not Need To Open It To Know It Was There,” are further examples of how great this band is. These two songs would fit excellently in any part of their discography.

Everything I said about Empire! Empire! above is basically true on this split as well. “We Were Not Small Or Great But Grown” kicks off the split with the introspective songwriting one would expect from this band. “It’s A Fate We Can’t Escape. Someday We Will Pass Away” is a very moving song about seeing someone close to you die. Honestly it is one of their best. It is also the first song by these guys to get close to the five minute mark in quite a few releases.

Rika’s one song on here is similarly fantastic. Calm, twinkly emo with great vocals (both lead and backing). The backing vocals don’t fuck around on here. “Skutner” is a great song that rises and falls in all the right places. This band is from Vienna, Austria. Check out their other stuff, it is great.