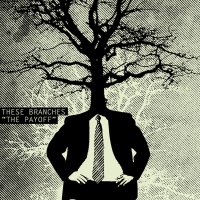 Post-(insert genre) bands are always kind of hard to discuss. In the event of a post-hardcore band, Fugazi will always be name dropped. Or, also in the case of post-hardcore, people will call it emo. It is kind of a dumb thing that always fucking happens.

If we want to get involved with the whole taxonomy of music, These Branches are a post-hardcore band. Nick Hertzberg (Guitar/Vocals) and Bryan Batiste (Drums/Vocals) have made a great sounding record despite there only being the two of them. This is still a punk rock record, punk being something a lot of post-hardcore seem to have forgotten. The guitars can get a little noodly or jagged, and it is not a generic 4/4 type record. But, true to the purest aspects of punk, there is no bullshit here.

The four songs, while being rather involved musically, maintain a simple feel overall. This is a record that is about grievances. Be it personal or professional. The third track, “Purist,” is about how loyalty and community should trump commerce. It states it rather bluntly:

“Our hearts will go further than you’ll ever know.
We stick to our words, won’t follow the herd year by year.
You may call me a purist but we know the truth,
what you did and didn’t do.
A dollar meant more than the friends you abandoned it for.“

The opener, “Profiteer,” is one of the strongest of the bunch. It is about the more shady side of the “business” (namely, club promoters). We live in a world where people are making a lot of money off punk music. Where DIY clubs are closing down, corporate sponsored clubs are on the rise. Like any corporate venture, they are more worried about money than art.

Basically, we have a great EP by a great band. It is great to see DIY still being something important in the scene. Punk rock can still mean something. Pick this up.
P.S. I really like the cover art. Even if it is a little Punk-O-Rama Volume 8. Just saying.
These Branches (official)
Download/stream (Bandcamp)
Buy it (direct from band)
Buy it (Kat Kat Records)